Everyone tells you to build MVP first, but you’re not sure if this is necessary for your business? Before you make a final decision, perhaps it’s best to review some common beliefs concerning MVP in app development. This way, you’ll find out what it really means to create a Minimum Viable Product. It would also give you an idea of how much you could profit from it.

What is an MVP?

Some theory, first. The Minimum Viable Product (MVP) earned its name because it has a minimal set of features that solve the users’ problem. But that’s not everything. It should also draw their interest and be perceived as an attractive product.

The term was first coined by Frank Robinson in 2001, but it got more popular thanks to Eric Ries, the author of the “The Lean Startup” book. Now, almost every app development company offers MVP apps to their clients – and not without a good reason.

Let’s take an example. You want to build a mobile app that helps seniors learn foreign languages. You’ve made some research – it turned out the most difficult part for users was learning an alphabet much different than the one they use every day.

In such a case, your MVP should focus on the problem concerning the alphabet and offer the best solution that makes it easier to read and write new letters. You can add the other educational features later. First, you need to check if users actually think that your app is valuable and worth their time.

User feedback can be a repository of knowledge that helps you improve the app and develop a better strategy.

With the MVP app, you get to know if your product is functional and evokes interest on the market. It allows you to avoid high risks, spend less budget on unnecessary features and save time on the mobile app development process.

Even though the idea of an MVP is rather straightforward, there are still some confusions and misconceptions towards its purpose or the way its development should be handled.

Almost every software company recommends building an MVP if a startup wants to enter the market with a new app. It’s easy to get the wrong idea that only beginners should consider developing a Minimum Viable Product.

What’s the truth? Undoubtedly, MVP is a perfect solution for startups. First of all, they often need to show the value of their apps as soon as possible, so they could attract investors.

Secondly, when you build the first version of a product, your knowledge about the target group is smaller. More experienced organizations know their users better, so they have an advantage in this matter. But it doesn’t mean that they won’t profit from building an MVP.

Actually, this would give them a chance to analyze the market from a new perspective, check whether users’ needs didn’t change over the years, and discover opportunities unseen before.

MVP app can even inspire changes in the offer and sales strategy, so it’s definitely worth a try also for big companies.

Myth nr 2. There’s no need to create an MVP mobile app when you have a fully-fledged web app

If your brand has been using a web app for years, you probably have a lot of insights concerning users’ behavior, preferences, and needs. But here’s a catch – what if mobile users seek something different that web users? Or maybe their priorities change when they have access to a dedicated mobile app? This is when MVP comes to the rescue.

You can use a Minimum Viable Product to collect a feedback concerning the product that you wouldn’t be able to get only with a web app.

There’s also a matter of navigation, notifications, and other elements that are mobile-specific. Dedicated apps for smartphones have a great potential. When you just wrap up the website into a mobile package, you can easily miss it.

Focus on the main features first

Think again of the language learning app for seniors. Let’s say in the web app, you have:

But seniors (or at least our imaginary group of them) use smartphones mostly when they have a spare minute outside of their homes – in buses or waiting rooms. They don’t have time for thorough explanations, and listening to the pronunciation of letters is not an option in public places, unless you have a set of headphones. A change in approach seems necessary then.

So, what can you do in your mobile MVP app? First, focus on the most crucial issue – the alphabet – and instead of the listening exercise, give seniors a chance to write letters. It is something hardly feasible in a web app but it’s not a problem on a smartphone screen.

Accordingly, you should consider what other features are worth the implementation and check what additional value you can offer that is available only on mobile devices.

When the MVP is not the best idea?

Of course, sometimes it’s hard to build a small MVP app that only solves one problem. For example, when you have big e-commerce and you know well that clients expect the same features you have on the website – or even more.

Especially, when the competition offers an impressive set of features in their mobile apps creating a simple MVP might not work out well. Nevertheless, it’s a must to point out the most important elements that should be included in a first version of the app and plan the strategy for the long-term development.

Myth nr 3. If you build an MVP app, you can skip the tests on a prototype

Both a prototype and an MVP allow you to verify the idea for an app. Nevertheless, it’s best to take some time for creating a prototype and conduct some tests. Why? It increases your chances of avoiding expensive mistakes – mostly concerning the choice of features and information architecture.

That’s why we always recommend usability tests after the Product design workshops. When the UI project is ready, it’s best to show the prototype to the potential users (5 or 6 people is often enough) and observe their behavior. If some problems show up repeatedly, the designer should make changes. This way the final app would work perfectly, and you could test the business concept and not just the intuitiveness of the product.

Myth nr 4. MVP is an unfinished version of the web or mobile app

When you really want to check if your app solves people’s problems, you can’t offer them something half-working. You wouldn’t be able to see if the product meets their needs and whether they enjoy using it.

MVP is a basic version of your app, but it is a completed product that helps people achieve their goals.

Take a look at our example of an MVP app – we’ve built it for Wroclaw Opera with Flutter. It’s not packed up with features. It was developed to make it easier to order tickets and check the repertoire. And it serves its goal well, in our humble opinion. This concept was based almost entirely on what users need. 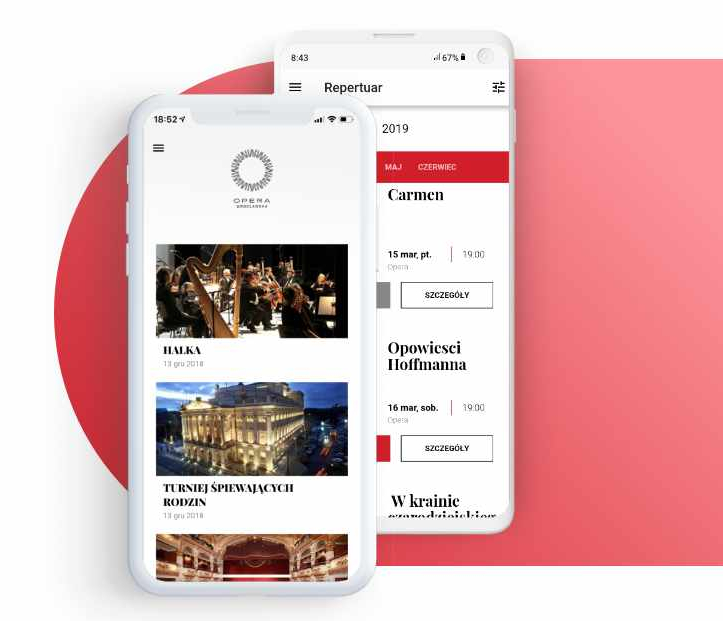 Of course, after the release of the MVP, you can offer additional options. Chances are that users will expect more and more from your app. But the MVP will show you if there is anything to build on in the first place, collect feedback and help you ensure the best user experience.

Myth nr 5. Minimum Viable Product is only for testing the concept

You think your project is so well thought-through there’s no need for tests? Trust me, that’s a common belief among the people who end up with apps nobody wants to open twice. But although verification of the assumptions is an important reason why MVP is often recommended, it’s not the only benefit it can give you.

MVP shortens the time to market, so you don’t have to wait until all the additional features are implemented. You can start solving users’ problems earlier and begin to profit from the app sooner.

Minimum Viable Product also gives you more time on the implementation of new features. The software company can regularly update the product and add new options with no need to hurry because it is already on the market and generates income.

How to create the MVP for your project?

The process of building an MVP consists of several stages, but first of all, you need to conduct research. Talk to your target users and find out what they struggle with and how they solve the problem you want to focus on. You can run interviews, search the market reports, etc. Any information will be valuable.

Templates for User Journey Mapping can also be a huge help, especially, when you want to identify critical points that need improvements.

Then you must find out what unique product value you can offer and how. You need to list all the features, figure out which ones are the most important or only nice-to-have, and prepare a user flow diagram.

It’s best to consult the plan for the MVP app with a team of web or mobile app developers who can tell you how much time it will take to build each feature. They will also show you the estimated costs.

If you need some support with creating an MVP strategy, we’re happy to help. We usually recommend conducting a Product Design workshop first. It allows us to focus on the main challenge and prepare a clear strategy that gives you the best chance to achieve your goals. The workshop is based on a Design Sprint approach.

Take part in a workshop and create an MVP that is really valuable – both for users and your business.

App Store Optimization: 8 Tips That Will Help You Increase a Number of Downloads

You’ve built a functional mobile app, but a low number of downloads suggests that not many people had a chance to find that out? Let’s run a quick test. Put yourself in the user’s shoes and type in the app store’s search bar a phrase that displays the apps from your category. If search results show the competition first, this means you should take care of app store optimization (ASO), so users could find your app easily.

When you want to download data for the app, you probably use the API RESTful interface. All it takes is to ask the server for the data and that’s it! This method works well when the app doesn’t need permanent access to new information. But what to do if the content has to be updated in real-time? A delay can make it impossible for the user to buy an item or make a sports bet, for example. But there’s a solution – WebSockets on iOS. Check out why you should implement them, and how to do it.

The relationship status between a developer and the Storage Access Framework (SAF) should be labeled as Complicated. Sure, this solution allows you to access files, but it’s also so annoying it makes you want to shut the laptop down and grab a cup of calming tea. Luckily, there’s a light in this tunnel. SAF relies on Activity result mechanics, so you can connect it with Activity Result API and enjoy a clean, well-organized code. Check out how to do it in a few simple steps.