Make sure your app works flawlessly and avoid costly errors with our quality assurance team.

Issues detected at an early stage of the software development are often easier to fix, so it takes less time and money.

By checking all the use cases, we can make sure the app serves its purpose well and allows you to profit from it.

When the app works perfect and ensures the best UX, users are more likely to get interested in your offer.

What is quality assurance?

The main goal of the quality assurance (QA) testing services is to find out whether your product has all it takes to achieve your business objectives. To make that happen, we check if your app meets the requirements described in the documentation. We also make sure that users will be able to perform the desired actions.

Our Quality Assurance team doesn’t limit itself only to the functional aspects. We also check if the product meets the UX standards, it’s intuitive, and visually consistent.

QA tests make it possible to create well-performing software in a less expensive way. They also allow us to save a lot of time on fixing bugs.

If someone detects the issue late, for example after the launch of the app or at the final stages of the development, it’s far more difficult to solve the problem. As a result, it more time-occupying and takes more money.

That’s the reason why we run software tests after each Agile iteration and find most errors as soon as possible.

The efforts of our QA team also result in the app that puts your business in a good light. How so? If every action is easy-to-perform and there are no problematic issues, your product builds a better image of the brand. And this directly impacts the revenue. 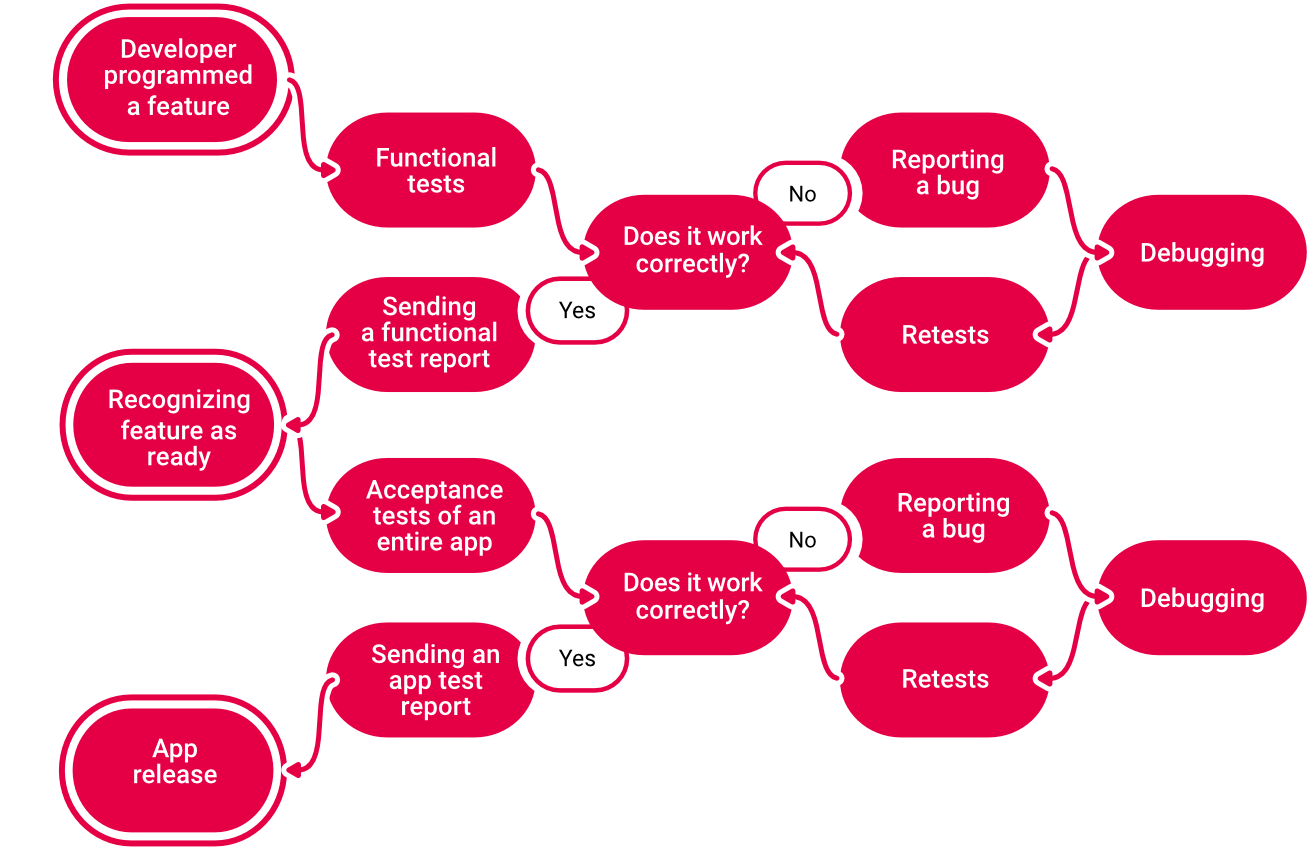 Goal: To check if the mobile or web app works correctly.

Stage: When the developer had finished creating an element of the app.

How does it work? The Quality Assurance team tests whether the element of the app was developed according to the designs, documentation, and guidelines prepared by the Project Manager or Product Owner.

Goal: To check if the reported bugs were fixed.

Stage: When the software developer had finished fixing the reported bugs.

How does it work? When the developer declares that the bug had been fixed, the QA specialist checks if it really is gone. If it still occurs, we make a list of the devices the issue was tested on. In such a case, the task gets back to the developer, so he or she could look into it once again and fix it for good. We repeat this process until the bug can’t be detected anymore on all devices.

Goal: To make sure that fixing the reported bugs didn’t cause errors in other modules.

Stage: After fixing all the bugs.

How does it work? We test the modules in which developers were fixing errors. Regression is not about checking if the bug is gone – we test the elements that are correlated to the module we were working on during the sprint.

Goal: To test if every use case meets the acceptance requirements.

Stage: Before the product launch.

How does it work? We check the use cases based on the provided documentation.

Goal: To check hard-to-detect bugs and those that are specific to the app.

Stage: When the app is already published.

How does it work? The QA Specialist tests the app that has already been launched. We conduct exploratory tests when the bug shows up that didn’t occur before the release of the app. This kind of test is also needed when the system on user’s device gets updated and this can cause problems with an app.

Build a mobile app with us

Our QA specialists gain experience during projects for many different brands. Their knowledge and professionalism is confirmed by ISTQB Foundation Level certificates.

What kind of QA services do you offer?

At what stage of the development process do you test the apps?

Our team follows the Agile approach to software development, so we work in iterations. The result of each iteration is a product that we test.

How many QA specialists test one app?

The number of testers involved in a projects depends on:

Check out our other services

Tell us about your project