Nowadays, there are tools that help us a lot to manage the memory when creating apps. Because of that, most software developers rarely encounter memory problems (or are simply unaware of them). However, every once in a while, we have to face some memory leaks. What do we do then? The most common method is to activate the Instruments tool and debug the problem, which can often be quite laborious. With the release of the new Xcode 8, Apple has introduced a new tool which significantly facilitates that – Visual Memory Debugger.

We will make a simple memory leak in order to test the new tool in practice. First, we create a simple class, the object of which may hold a reference to another object of the same class.

Then, we create an equally simple view controller. It will hold a reference to a LeakObject. In the method viewDidLoad(), we will create another object of the same class and link them together.

To facilitate this, I have created a button that will delete our view controller from the navigation stack. Everybody can probably figure out what should happen then. The mutual strong reference of the LeakObjects will allow them to remain in the memory, and a leak will occur. Let us move onto debugging, then!

The icon launching the memory debugger is located to the right of the view debugger icon, which is quite frequently used by all iOS software developers.

The debugger interrupts the execution of the app and displays a visualization of the memory usage. As we have suspected, deleting the view controller has caused a leak, of which the debugger has meticulously informed us.

The main screen displays a visualization of those objects and their relations. 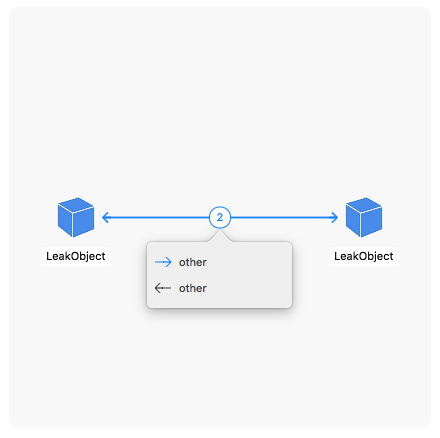 Clicking a specific object will provide us with detailed information on it.

Furthermore, Xcode informed us of the leak while the program was running.

Clicking the purple icon provides us with detailed data on it.

For the purpose of the article, a simple memory leak has been created and then meticulously spotted by Xcode and visualized by the new memory debugger. This tool will definitely be more useful for complicated problems, in larger projects. The new debugger is intuitive and easy to use. I encourage you to use it at the nearest possible opportunity. You can find more information in Apple’s presentation from the WWDC that took place in June.

The best way to set a connection between a user, provider, and an app? System notifications. They allow users to get the latest news in no time. This solution is easy to implement in apps dedicated to one market. But it gets complicated when the messages must be displayed in many languages. In such cases, the dynamic localization of remote notifications can be a real game-changer.
Read more
Wojtek Byczkowski

When you want to download data for the app, you probably use API RESTful interface. All it takes is to ask the server for the data and that's it! This method works well when the app doesn't need permanent access to new information. But what to do if the content has to be updated in real-time? A delay can make it impossible for the user to buy an item or make a sports bet, for example. But there’s a solution – WebSockets on iOS. Check out why you should implement them, and how to do it.
Read more
Igor Kurek

Every person with software development experience can share a few stories about incorrectly working features. We build our apps out of small pieces, introduce advanced architecture patterns, and yet sometimes one of the elements fails, causing bugs or even system failures. In such cases, feature toggling can save the day! Find out how to implement feature flags, and make your app more stable.
Read more

Check out how we use our knowledge in practice, and make your project with us.
Get estimation

We use cookies on our website for statistic and marketing purposes. Find out how to turn them off.